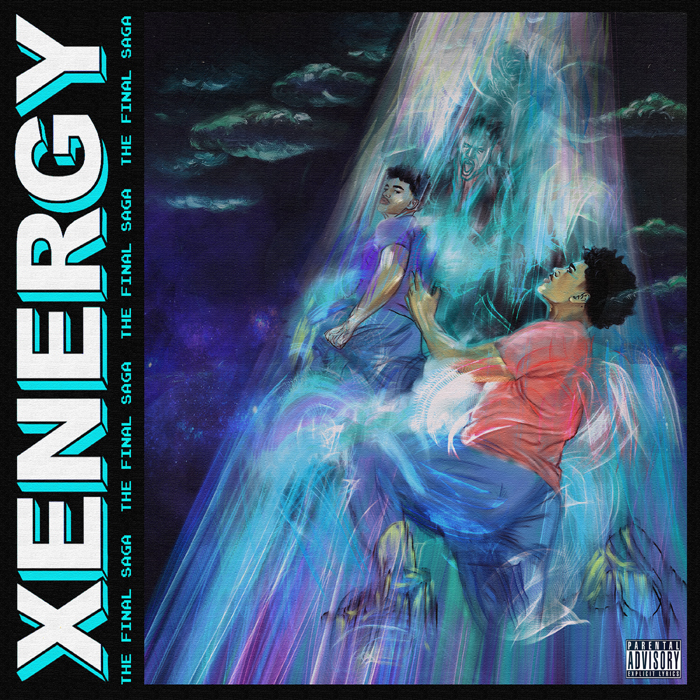 Shane Eagle emerges as a pioneer for the future of entertainment with his latest visual offering titled “Xenergy: The Final Saga”. As the owner and founder of an independent record label, Shane Eagle teams up with a talented group of young artists, graphic designers and film makers, who have dedicated their time and energy to create this inner world experience.

A selection of “fan favorite” tracks have been singled out from the acclaimed mixtape DarkMoonFlwr (DMF) to compile a series of Live Performances that has been built on the anticipation for a “Shane Eagle – DarkmoonFlwr Tour”, initially planned for this year. The compilation of performances have been structured as Visual Album to premiere exclusively on Apple Music as an extended narrative to Shane’s interview on “Rap Life” with their very own Beats 1 Radio host Ebro Darden.

The compilation consists of 7 Live Performances that take place in a simulated world herein referred to as “Xenergy”. According to the artist, “Xenergy” is described as “a meditative space in time, which prevails in the mind state of one who has found a balance between chaos and peace”. Each of the songs are thus performed in a different scenario, drawn from the archive of his memories of feeling a sense of loss, pain, hope, inspiration and gratitude – all expressed in the making of DMF.

The first focal track to be shared from the playlist (Friday, 2nd October) is “Up 1” Ft. Lute from Dreamville. The song was created as an expression for the loss of a dear loved one that Shane endured while simultaneously experiencing one of the highlight’s of his career – traveling Europe with Bas and Lute from the Dreamville team for the “Milky Way Tour” early last year. The performance visual thus depicts the artist rising above murky water, elevating towards the stars in a state of alienation from the rest of the world in order to grapple with the duality of his reality. It is in this way that the artist aims to represent the importance of continuing to pursue a path of self-reliance and independence throughout his career, that is less travelled by most. As such, the expression of “Up 1” presents the idea of turning your losses into victories – and is especially relevant in a time where loss has been the common experience for 2020.

The second focal track “Whispering to the Moon” Ft. TheHics features the London based duo Sam Paul Evans who features on the post production; and Roxane Barker on the vocals. The collaboration aligned organically for Shane from their introduction to each other on the Milkyway Tour. The visual drops Friday, 9th October where the artist is seen performing in an isolated space, with only a pink fluorescent moon to confide in. It aims to presents the idea of hope for signs of a greater purpose behind life’s adversaries and serves as a reminder that you are never truly alone in your dark times.

Representing his partnership with Ellesse (SA), Shane Eagle is seen wearing a special costume (or “spacesuit”) decorated with custom painted video game character badges, who have inspired and informed his artistic development since his early childhood days. It is in this way that the notion of him traveling through the past, present and future version of his reality is conveyed through his attire as well.

The full visual album drops on the one year anniversary for DMF which is Friday, 16th October where performances for the tracks Zaire, Storytime, Vanya and June are released to pay homage to what DMF has embodied for Shane and his fans. Additionally, as an incentive to reveal a teaser for his upcoming body of work, the artist has included one unreleased song titled “Racks Talk” prod. by Gemini Maejor as the last track in the visual album plus the full audio single version for his fans to enjoy as he enters the next phase of his musical journey.